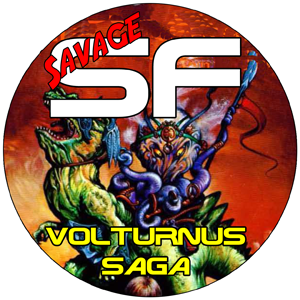 In my efforts to convert Star Frontiers and the beloved Volturnus adventures over to Savage Worlds, I also wanted to re-imagine it to something more epic, more interesting and more fun. And more up-to-date. Chris Putnam’s vision of the overall campaign structure was a big help.

One of the more hokey aspects of the campaign were the creatures. One of the most hokey was the Air Whale. However, through my crafting and a little imagination, I have re-invented and re-imagined this created somewhat.

Volturnian Air Whales appear to be part plant and part animal, however they are far more than that. The top of the Air Whale is covered with plant life. It gathers their because the Air Whale is almost always in flight and is bathed in sun. Due to how it feeds (see below), plant-life ends up gathering and growing on its’ back.

The giant creature feeds by skimming the tree tops and feeding off small woodland creatures (including the Kurabanda) that live there. It produces hydrogen as a by-product of feeding. The hydrogen is stored in hundreds of inner membrane sacs. The hydrogen provides the lift which lets the air whale float. Compressed hydrogen, vented through tubes scattered around the air whale’s body, lets the creature maneuver.

Crystal-based life forms born of old Eorna tech have a symbiotic merged with Air Whale. These crystals focus sunlight into a beam, much like a laser. The crystals can fire up to six shots per turn, with damage divided as desired among the attacks. The crystals also store solar energy, and can fire two shots when direct sunlight is not available.

From the bottom of the creature hang hundreds of tentacles 10 meters long. The air whale can make 10 attacks per turn with tentacles. Tentacle attacks must be rolled separately. Note that the air whale has two different attack forms depending on whether the victim is above or below the creature.

Here are some pictures of the work in progress. Used the Force Awakens Rathtar you can get on clearance at any Walmart, and a dollar store whale. I’m going to make my players hunt this thing down.