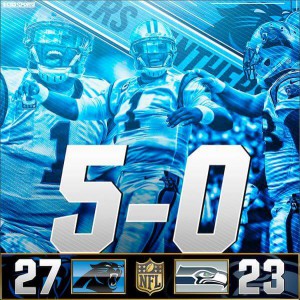 I can not tell you how good that win felt.  After so many years of near misses and close losses, Cam lead our boys to a victory that was very satisfying.  They finished the game finally!  Played all 4 quarters and never gave up.  Cam took advantage of a team on the decline and found just enough weakness to come home with a win.  We beat them in THEIR house!  The loudest stadium in the NFL.  The 12th man who?

What is amazing is how complete the win was – all 3 aspects of the game played well and only a few mistakes.  And they came back from every mistake like it never happened.  Opened up with a  sack.  FOrget about it.  Get an interception.  Forget about it.  Cam was on target for the rest of the game, for the most part.  Very happy with the win!