Ron McClung Posted on June 7, 1992 Posted in The Nightbreed No Comments Tagged with Creature

Rachel is a breed of Shapeshifter called an Ethereal Shapeshifter. She can change into a mist that can pass through solid objects. She was the “mate” to another shapeshifter she traveled with, named Toledo. Because of her facial perfection, she is secretly called “the Hostage” by other breed.

She has a sensitivity to the Sun.

Rachel is of gypsy origin, traveling the plains and mountains of Western Europe for the first few decades of her life, in the early years of the 12th or 13th century. She was cast out of her tribe, due to fear of retribution by the church during the inquisitions. She survived for years, first traveling in side shows and circuses as an escape artist, then with a clan of shapeshifters that were later hunted down and either killed or lost. With this tribe, she found her late husband. He and his friends knew of Baphomet and his Breed. They spent their lives searching, and only she found it. But once she did, she knew she found home.

She has to be kept separate from most other breed, because of her facial perfection. Some doubt her true loyalty to the Breed and that she feigns her sensitivity to the Sun.

Shapeshift into supernatural mist at will.

Can create poisonous gas at will. 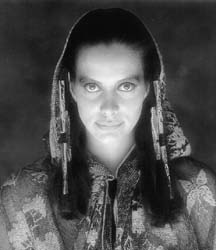