Wolf in the Fold revisited 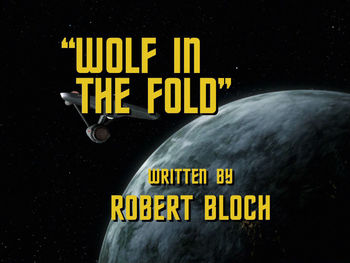 Just watched the episode Wolf in the Fold, one of my favorite episodes. I still see that as a missed opportunity for a really good two parter. I know budget limitations prevented it but when the Red Jack entity took over the ship and attempted to feed of the fear of the crew… so much missed opportunity there. Turning the entire Enterprise into a horrific horror show would have been awesome in my opinion. And then the final solution was basically a precursor to a virus scan. So cool! I know some folks may disagree about taking a dark turn but it would have been appropriate for at least that episode.  I am not saying the halls would run with blood but things could have gone pretty dark.  Whole sections of the ship could have turned into a horror show.  Torture chambers run by crew that might have a more sadistic side that Red Jack brings out.  Dead bodies in the hallway.  Stuff like that.

I think an adventure (perhaps in Star Trek Adventures) could dove-tail off this and explore it further.

A derelict ship is spotted on the edge of Federation space [possible alien or Federation], near the Neutral Zone.

The [PLAYERS SHIP] is called to investigate the derelict ship.

The ship has some significance.  Either it was a previously lost ship from the Federation or another alien race [Klingons?]

A Fragment of the Red Jack has taken over the ship.  Murder and savage fear have taken over.  Most of the crew have been brutally murdered, their blood and body parts ornament the hallways.  The away team has to get through various challenges to get to the bridge

Additionally, a mission team of the alien race that owns the ship (or, if a Fed ship, Section 31) have boarded the ship and seek to take control.  They will attack the away team as well.

The Fragment seeks to rejoin the whole that is gathering somewhere in the neutral zone – perhaps a home location for the entity.